Zanele Muholi is a visual activist and a photographer getting attention for her latest project which chronicles the lives of black LGBT in South Africa. She especially archives the lives of South African lesbians. Her project sends a bold statement, that LGBT are living their lives in spite of. In spite of particularly physical treats, as South Africa is known for it’s violent treatment of black lesbians. Black lesbians living in especially lower classed area are vulnerable to corrective rape and violent acts against them. These images are beautiful and I hope to see a more positive representation of our black LGBT community across the globe. 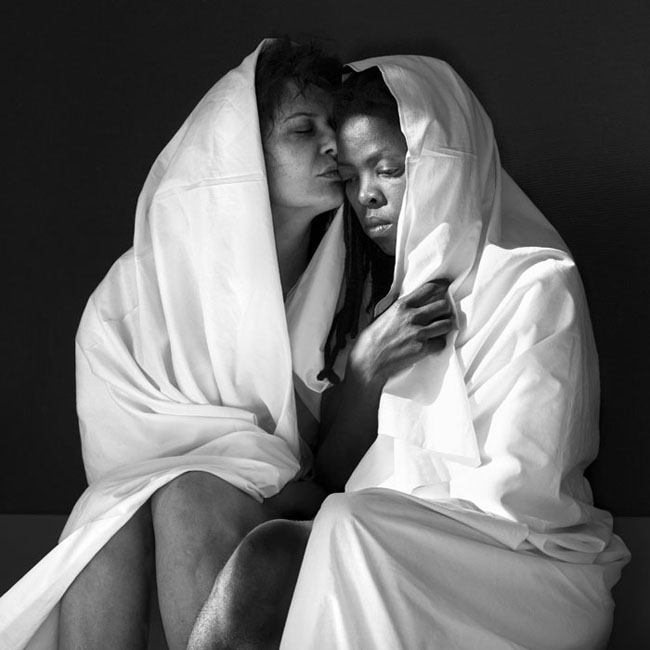 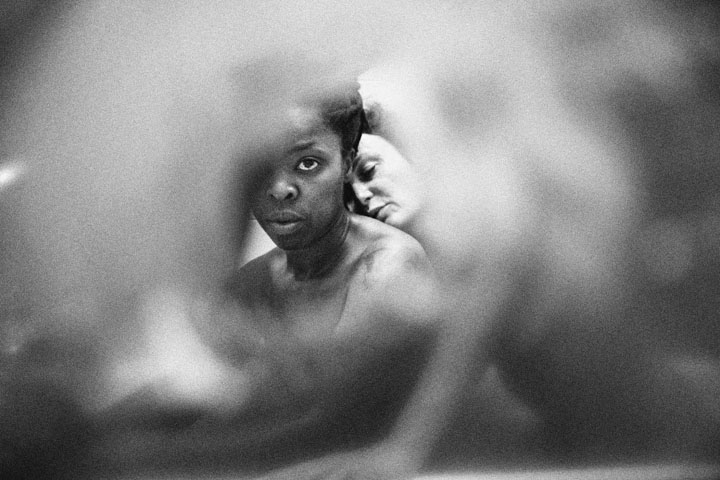 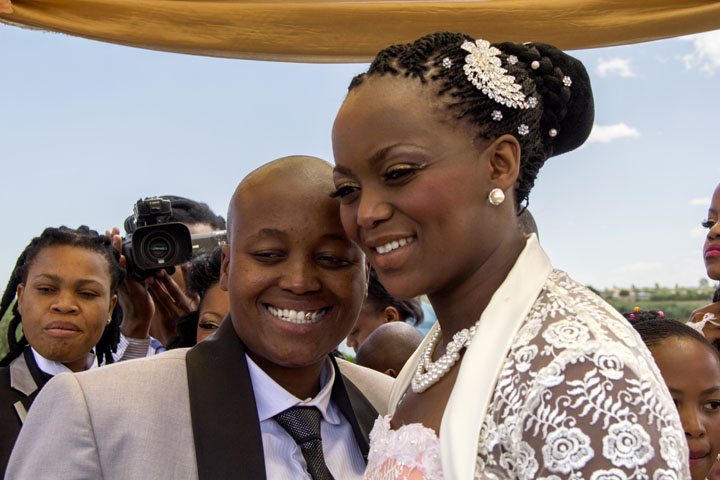 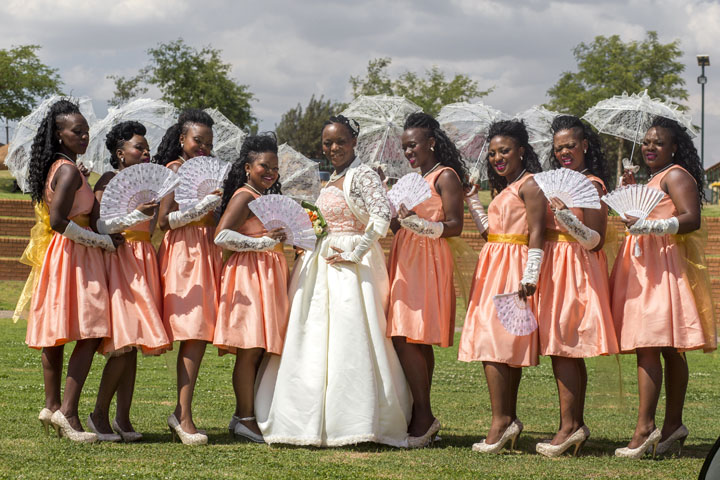 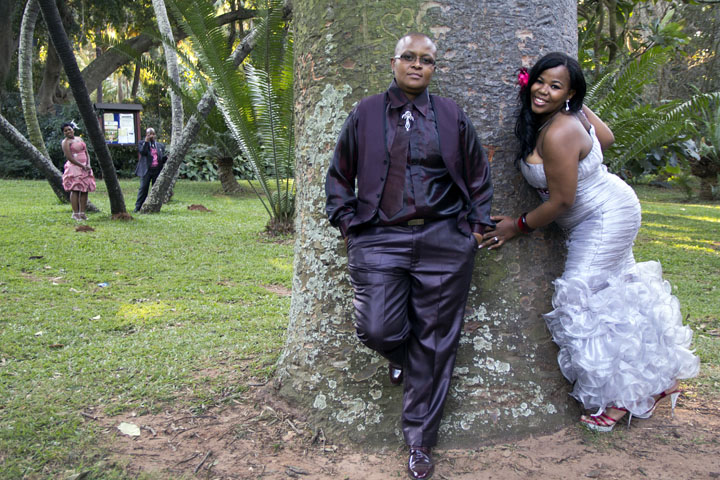 A powerful installation hits you upon entering Zanele Muholi’s current solo exhibition at Stevenson’s in Johannesburg: a glass coffin in the centre of the room, filled with flowers, and a framed self-portrait of the photographer. Muholi tells me that she had it custom-made, and on the opening night of the exhibition, she lay in it. Muholi’s exhibition, entitled Of Love & Loss, depicts the lives of lesbians, gays and transgender people, by exploring the binaries of joy and sadness, acceptance and intolerance, life and death. Like most of Muholi’s previous work, Of Love & Lossputs lesbians (particularly black lesbians), who are subjected to murder and ‘corrective’ rapes in South Africa’s townships, into sharp focus. According to Muholi, the coffin alludes to the fact that lesbian funerals become ‘state’ funerals; when a lesbian is murdered and this news gets to the media, the act of mourning essentially becomes the property of the state. “Every media house wants to document that murder,” she adds, “there is nothing private about these funerals.”

Most of Muholi’s work centers on making the private public, and she is well aware that power for change lies in doing so. Essentially, she wants her images to act as a “photo album inside a gallery.” Not only do her photographs focus on loss and mourning, but they also highlight love and celebration, both of which, she believes, should not be hidden and kept behind closed doors.

According to Muholi, the overall project is about the events that are taking place in South African townships today: from weddings to funerals, relationships, love and family, and how the queer community – gays, lesbians and transgender people in particular – is perceived by South African society at large. “I like the juxtaposition between love and pain and playing with the binaries. I’m talking about love but I also want to acknowledge the fact that young black lesbians are being murdered in Thokoza.”

Not only does Muholi’s work speak of the persecution that black lesbians are subjected to in the townships, but it also highlights the great contradiction that lies at the heart of this issue: the fact that gays and lesbians can legally marry in South Africa, yet, at the same time, certain segments of this community are being raped and murdered based on their sexual orientation, and how race definitely plays a part.

“We, as lesbians, have been given the right to express our love yet there is ongoing persecution. [I’m] thinking back to the history [of apartheid], how people were vilified and degraded and persecuted for being in inter-racial relationships – today we are fighting a different kind of war where we have to deal with hate crimes that persist. All the hate connects because history informs who we are today.”

Muholi’s series entitled ZaVa focuses on her relationship with her white partner, and brings the notion of making the private public to the fore. The images show the two of them sharing intimate moments in hotel rooms in various states of undress. The images are soft and gentle, and the viewer is able to get a sense of their relationship, their love for each other, in a deeply connected and meaningful way – not in a detached, voyeuristic sense. Muholi tells me that these images were taken in different cities, namely Paris, Venice and Bordeaux, and that they, although very intimate, convey a “sense of loss” – which, I take to mean, refers to the Constitution contradiction: that although Muholi (and other lesbian couples) are able to freely express their love in whatever manner they choose, there are still those who cannot – there are still those whom we mourn for, both in the literal and metaphorical sense.

Many of the images in Of Love & Loss depict the celebration of black gay and lesbian weddings. She tells me about Ayanda Moremi’s marriage to Nhlanhla in Katlehong, Johannesburg, in November last year. Ayanda, a lesbian mother who lives in Vosloorus, was at the forefront of Duduzile Zozo’s funeral. Zozo, a butch lesbian, was brutally murdered in Thokoza township a few months before Ayanda’s wedding. According to Muholi, the whole community, as well as friends and relatives, came out to support Ayanda and Nhlanhla’s wedding, with “not a trace of homophobia on the day.”

“It was the first lesbian wedding in that space … yet a few months earlier Dudu was brutally murdered. I can’t explain it: the community embraces queerness but at the same time there is extreme hatred.”

An interesting point comes up at this juncture: not only does Muholi’s work deal with sexual orientation, but also with that of gender identity. I mention this, and Muholi says that during her documentation of lesbian weddings, there is a marked distinction between ‘butch’ and ‘femme’: “[These weddings have] a lot to do with masculinities and gender binaries: there is a bride, and a groom. I noticed that with most of the same-sex marriages that I hardly see femme and femme getting married or butch and butch. The ‘butchness’ and femininity is so well-defined and pronounced. It is gender within gender.”

It’s also no coincidence that most victims of ‘corrective’ rapes and murders in the townships were masculine-identified. “Some survivors have said their male attackers told them they’d make them pregnant; that they’d prove to them they’re not a man, they’re a woman. It threatens and destabilises their male power.”

Muholi sees her image-making as not only an act of activism, but also as archive creation. She says that the reason she specifically documents the black gay, lesbian and transgender community is to contest its so-called ‘un-Africanness’: “We live in a time when we don’t know what is African anymore – who is African and who decides what is African? We, as black communities, have not had our histories documented properly.” Let’s be very clear: Muholi is not only a photographer who documents people’s stories – she is an art activist, and activism is her life; she does not merely give lip service to it. I tell her that even though her images are powerful and moving, being a white queer woman, I feel a sense of disconnect – these rapes and murders are happening ‘out there’, not to me or those I love. I mourn an imagined loss; a loss, because I’m not directly affected, is distant and somewhat detached – a reality that could be mine, but isn’t. I tell her that I often feel hopeless, not knowing how to change this disturbing situation.

“During apartheid some people didn’t want to participate in an unjust system and they denounced racism – even if they weren’t directly affected by it. Writing, blogging and denouncing all are forms of activism … We can learn from each other and come up with a different form of socialisation because society is divided.”

She urges me – and those like me – to go into the townships and “destabilize” the notion that they are dangerous; she urges white South Africans to get to know the townships “just like we [black people] know the suburbs.” She tells me to engage with people and question what I don’t understand. According to her, only by making an individual effort can we begin to break down the multiple stigmas of racism and homophobia. Muholi believes that we can do things differently, that we can make a difference – but it depends on what each of us is willing to do. “It is my duty to pave the way for others to see that it’s possible. How do we embrace each other and mix without faking it? The new South Africa I long for is where people collaborate, beyond races, and where queer people can make a difference in other people’s lives.”

* Of Love & Loss is currently on at Stevenson, 62 Juta Street, Braamfontein, until 4 April. A separate body of her work, entitled (Mo(u)rning) is also currently on view at the Wits Art Museum in Johannesburg; it forms part of the Queer and Trans Art-iculations exhibition and is jointly exhibited with Gabrielle Le Roux’s Proudly African & Transgender and Proudly Trans in Turkey until 30 March.

Ang Lloyd, based in Johannesburg, is an observer, traveller and storyteller.