The New York Public Library’s Picture Collection in midtown is one of my favorite solo hangout spots. It’s quiet, there’s plenty of space to spread out, the librarians are very helpful and it seems they have images on nearly every subject you can think of. One day while doing research on 1970s women’s fashion, I found a few images of members of The Young Lords Party from the same time period. 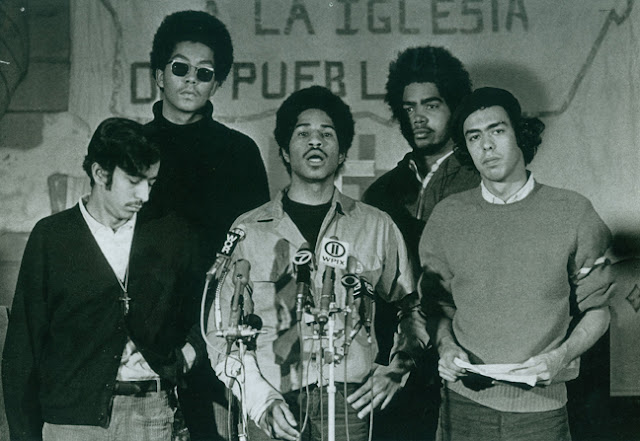 An offshoot of the Black Panther movement, the founding members of The Young Lords party grew up in the NYC projects as the children of working class, Puerto Rican migrants. They were known for their proactive (albeit radical) social protest and community activities like burning garbage piles and taking over a church to run a free breakfast program. To find out what they stood for, read the 13 Point Program and Platform.

However you may feel about socialist movements, the Young Lords should be admired as youth who tried to affect change in their communities. They addressed issues of the time and empowered their own people by testing for lead poisoning in the NYC apartment buildings, providing healthcare services and establishing a day-care center, hosting community dinners and encouraging artistic expression through poetry and films.

While flipping through images of decadent 1970’s fashion advertisements these young radicals stood out. What I love most is seeing Latinos of all shades and hair texture working together, not phased by the petty discrimination rife within their community. Though like all revolutionary struggles of the ’60s and ’70s, machismo was present and women were initially discriminated against… but they dealt with it.

Watch this 2009 Democracy Now! video or buy the book, Palante to learn more about this influential activist group. Though issues they fought against like gentrification still threaten New York City, the men and women of The Young Lords Party undoubtedly had a direct effect on the individual lives of the people they helped.

For more on revolutionary youth, check out my recent post on the Black British Panthers!