Women are often portrayed as the victims of war. Or as nurses. And maybe as spies. During armed struggles, mass media seldom portrays women as protagonists and almost never as leaders. Of course, within the world of resistance to colonialism there have been female icons and heroes: especially Queen Nzinga in Angola, Nanny in Jamaica, and Harriet Tubman in the United States, plus, so many others who are too often nameless in our history.

The women of Viet Nam are exemplary both as fighters as well as those who are overlooked. Their reality was significantly different from media-popularized examples. In Francis Ford Coppola’s Apocalypse Now, often considered the greatest Viet Nam era war movie, the woman warrior is a guerrilla who threw a bomb into a helicopter; but in that movie, women were never presented as soldiers in the field. In another famous war movie, Stanley Kubrick’s Full Metal Jacket, the female warrior is a sniper.

In Viet Nam, the reality of female soldiers was far, far more complex. Women were both frontline fighters as well as active rear-guard operatives. Spike Lee’s movie, Da 5 Bloods, is a more recent example of the erasure of females as fighters in Viet Nam. Viet Nam has provided the setting for numerous seminal examples of American movies about 20th century men at war. In contradistinction to the male subjects, most of those movies minimize the role of women.

Here is a small example of the other side of the story: women fighters in Viet Nam. Written by Sherry Buchanan, this article presents the stories of Vietmanese women who fought for the independence of their country. Their story is not easy for us Americans to digest.

The essay is neither an anti-war homage, nor simply an anti-imperialism screed. This is a specific look at the role of female fighters. While western culture valorizes Joan of Arc, few of us focus on the literally thousands of women who were soldiers engaged in active resistance against 19th and 20th century “new world” domination in Africa, Asia, and the Americas.

Many of us who served in the military during the sixties and seventies, were forced to confront conditions that counterintuitively led to a major political education. This is especially true of Viet Nam era veterans. I was in South Korea on a mountaintop approximately 50 miles below the DMZ that separated that country into two. In later years, reflecting on my experiences and the larger social reality, I specificantly wrote about the women of Viet Nam. 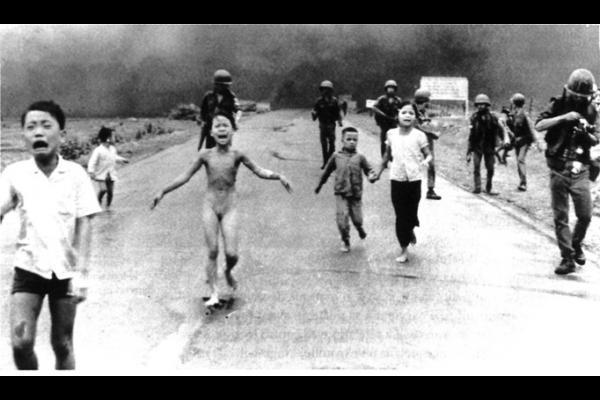 For the women of Vietnam, patiently threading together their share, and more, of Third World struggle & solidarity

dawn is the illumination

and so began the days

when Nguyen was new,

with thorny barbs which savagely

piercing a jaw, lancing a gill

or slicing an eye

but who cares now

that the war was lost so

no longer transmit onto tv sets

into our living rooms

stench of flaming bodies or

of street side summary executions

as bullets shattered the skulls

so who cares now

the killers are back home

where we do not see nor feel

nor do we cross

nothing green can grow

who cares, now that

the dear johns and joes

are gone, to the victors

have gone the spoilt

who remembers those naked little girls

running down the highway their mouths

those little girls who are

no longer girls but women now

women whose wombs may never conceive

women who can not dance without pain

women whose scars will not heal

women who can not give birth without surgery

women whose ears can not hear subtle string music

women who can not remember ever having rest

nights nor sense the tenderness of a lover’s

as you struggle in your homeland

a place bombed almost back

“into the stone age”

out of the survivors of war

a prostitute becomes a nurse

an orphan a teacher

a cripple becomes an administrator

and a blind woman an interpreter

Nguyen, it is the work of you

to worldwide efforts at

Nguyen, knowing you helps us

know that we are more

less than our future,

neither animals nor gods

but oppressed people who can grasp

in the face of pessimism

you who continue, all of you

who inspire hope, whose recovery

encourages all of us victims

ascending out of occidental ashes

you who move as in a morning sun

rising side by side, always rising,

as in a morning

I do not usually explain my poetry but this post is special. The context of the poem is important to me. “Morning Calm” was written in the late seventies/early eighties and was originally conceived as part of a collection of poetry to complement essays I wrote and published under the title of Our Women Keep Our Skies From Falling.

I had planned to publish a small book with both the poetry and the essays together but, as with so much in life, that never came to pass.

I served in the U. S. Army 1965 – 1968, the Viet Nam years, but I did electronic nuclear missile repair in South Korea. Korea was a major awakening for me about the international aspects of our struggle. I learned a lot from the women in Korea, most of whom were prostitutes who lived in a small village just outside the gates of our mountaintop base.

I came out of the army fired up and ready to rumble, seeking far more than civil rights. By 1974 I was a delegate to the Sixth Pan-African conference in Dar es Salaam, Tanzania. The Chinese were already working in East Africa. Does anyone remember the Tan-Zam railroad and the effort to break apartheid’s economic stranglehold on central and southern Africa?

Three or so years later, I led a delegation to the People’s Republic of China. Twenty educators and activists from across the United States spent over two weeks traveling throughout China and engaging in serious ideological sessions with Chinese comrades. Again, my consciousness was raised.

The more I learned about the world and the more people I met who were struggling for self-determination, self-defense, and self-respect, the more I understood that our struggle was truly a global struggle and not simply a racial struggle, or even mainly a Pan-African struggle. Eventually, I moved away from advocating nationalism as a solution to the issues our people faced. I also became very, very clear that sexism and its attendant ills (such as homophobia and heterosexism) was a serious issue that had to be fought both internally and externally.

“Morning Calm” is a reflection of my developing global consciousness and of my anti-sexism advocacy. In 2010, far, far removed from when I wrote this poem, I taught Vietnamese students in high school. A few of our students were born in Viet Nam. Most of them dealt in various ways with the issues of assimilation and retaining their culture, especially their language. This poem was written for the women who are today the grandparents, aunts, and perhaps a few mothers of those students. . .

One other thing, as I have said numerous times, I use music as my literary model. The rhythms and internal structure of this poem are based on John Coltrane’s version of “Softly, as in a morning sunrise.”

A luta continua (the struggle continues). . .