For someone who is in love and recently married, a wedge of “very odd pain” is lodged in Mpho Tutu van Furth’s heart.

It is caused by the South African Anglican church’s refusal to allow the daughter of one of the world’s best known Christian leaders to continue to work as a priest after she married the person with whom she has pledged to share the rest of her life: a woman.

“It was hard for me to give up my [priest’s] licence, it felt incredibly sad,” Tutu van Furth – whose father, Desmond Tutu, won the Nobel peace prize in 1984 for the struggle against apartheid – told the Guardian.

“My father campaigned for women’s ordination, and so every time I stand at the altar I know that this is part of his legacy. And it is painful, a very odd pain, to step down, to step back from exercising my priestly ministry.”

The civil wedding of Mpho Tutu and Marceline van Furth took place in the Netherlands in December and was followed by a celebration at a vineyard in Franschhoek, near Cape Town, last month. 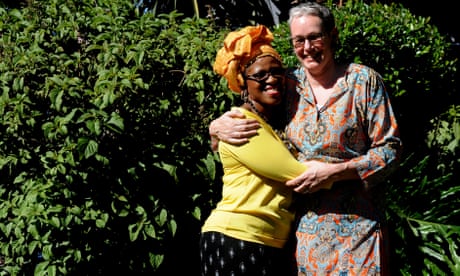 One bride was a black South African priest, the other a white Dutch atheist academic. They declared their love and mutual commitment in front of family, friends, and members of the church. Desmond Tutu gave a “father’s blessing”, but was unable to bless the union as a priest and the former archbishop of Cape Town. Although same-sex marriage was legalised in South Africa in 2006, the Anglican church holds that marriage is a union between a man and a woman, and does not permit its clergy to bless or conduct same-sex weddings.

Nor does it allow clergy to marry same-sex partners in civil ceremonies, and it only tolerates same-sex relationships if they are celibate.

Although Tutu van Furth was ordained in the US, where the Episcopal church allows same-sex marriage, she had returned to Cape Town, and was licensed to officiate as a priest by the diocese of Saldanha Bay. She knew the writing was on the wall.

Raphael Hess, the bishop of Saldanha Bay, came to see her. “He was incredibly caring and generous with me,” she says. “I said to him: ‘I know you’re required to take back my licence, but rather than have you do that I’m going to offer to give it back to you.’ To which his response was: ‘For now’.”

Other clergy in the diocese offered to hand in their licences in solidarity with Tutu van Furth. “I was incredibly moved. This wasn’t an empty gesture – their livelihood was at stake. It was a real commitment.”

Tutu van Furth rejected the offer, but says: “In South Africa I’ve had an incredible outpouring of support – and an incredible amount of sadness. People have said: ‘Is this still the conversation? Are we still in this place?’”

The reaction elsewhere has been mixed, she says. “There has been some venom, maybe, in some of the reactions from other parts of Africa, and from the UK surprisingly enough.”

Charlotte Bannister-Parker, a clergywoman from Oxford and family friend who officiated at the Franschhoek celebration, “has been subject to horrific attacks. The ‘inquiry’ into what she did hinges on whether or not the word ‘blessing’ was used in the ceremony at any stage. That feels so incredibly sad, that the church is allowing ourselves to be tied in knots by legalisms.

“What Charlotte was doing was praying with us. You can pray with a rapist, a murderer, a torturer – but heaven forbid that you pray with two people in love.”

From other parts of Africa, where hostility to same-sex relationships is deeply entrenched, “there was a little bit of ‘are you Christian?’ or ‘the devil is using you’ – that flavour of things.”

Mpho Tutu met Marceline van Furth in 2011, the year the clergywoman moved back to South Africa from the US. Van Furth, a professor of paediatric infectious diseases at Vrije University in Amsterdam, was one of a group of visiting academics.

Was there an instant attraction? Tutu van Furth laughs. “No, no. I was still married at the time, even though the marriage was clearly in trouble. She was a nice lady professor. We had nice conversations; that was it.” The pair got to know each other better after Tutu van Furth went to study in the Netherlands. The relationship developed beyond friendship, although there was no sudden or even slow recognition of the priest’s sexual re-orientation.

“What defines our relationship is that we love each other, that we enjoy each other’s company, we are mutually respectful, mutually supportive. It’s those things that really matter the most in the relationship – and in any relationship.”

Tutu van Furth pondered the relationship in prayer. “Ultimately, the place I arrived at was, if this were a man what would you be doing? How do you have an honest relationship with this person? If this is love, then it’s love – and if it’s something else, then you shouldn’t be involved.”

At that stage, the church’s view was of less concern to her than her family’s. “Was I prepared to stand next to this person in front of my family, in front of my children? And the reality was, yes I am, this is the person with whom I’m choosing to make my life.”

The reactions of her daughters was similar to those of many children whose parents split up and find new partners. “They are adjusting, like any family that goes through a reconfiguration,” says Tutu van Furth.

Her parents were supportive. “They said they loved me and all they wanted was my happiness.”

Desmond Tutu has championed LGBT rights and same-sex marriage. “I would not worship a God who is homophobic and that is how deeply I feel about this,” he said at the 2013 launch of the Free and Equal campaign in Cape Town. “I am as passionate about this campaign as I ever was about apartheid. For me, it is at the same level.”

Tutu van Furth says: “My dad has a real gift for being on the right side of an issue, not from the point of the argument of right and wrong, but from the point of caring for the people on the margins. Who is the least powerful one in this configuration? What is the most loving thing in any situation? That generally leads him in the right direction.”

Growing up in the Tutu household, Tutu van Furth was certain that she did not want to become a priest. “I was very sure that being a priest wasn’t what I wanted to do. I spent a lot of energy explaining why I wasn’t going to be a priest. The reality was that for much of my life, it wasn’t a role that was open to me [as a woman]. Once it was, I still struggled against it for quite a while.” Mpho Tutu with her father in New York in 2014. Photograph: John Lamparski/WireImage

She was ordained in her early 40s in the diocese of Washington, where she is still a “priest in good standing”, despite her same-sex marriage. The US Episcopal church declared in 1976 “homosexual persons are children of God who have a full and equal claim with all other persons upon the love, acceptance, and pastoral concern and care of the church”. In 2003, it ordained its first openly gay bishop and in 2015 it embraced same-sex marriage.

Earlier this year, the global Anglican Communion imposed de facto sanctions on the US church for its stance, in a move that avoided a split in the church but highlighted the bitter divisions over human sexuality.

Tutu van Furth says “deep searching discussions and debates” will continue. “Those who are vehemently opposed to same-sex marriage really dug in their heels” in response to her marriage, “and those who have been letting the issue slide, so to speak, have realised that they can’t afford to let it slide for another umpteen years, umpteen synods. And that we really do have to talk about marriage and same-sex unions, and that we do have to address all of our membership and not just those with whom we find easy agreement.

“I’m not spoiling for a fight; it has to be a conversation. But the gift of being in a country where same-sex marriage is legal should mean the church can be the place where we can have a theological conversation about the nature of marriage.

“That conversation can inform some of the dysfunctional relationships that people have that get to be called marriage because they’re between a man and a woman whether or not they have any regard to mutuality, choice, respect or any of the other things that make marriage truly joyful and worthwhile.”

Is she hopeful things will change? “Oh yes, absolutely. But I think it will be a robust conversation that brings us to change rather than a floor fight, for which I’m incredibly grateful.

“I do believe that in the fullness of time our prayer will bring us to the place where all of us recognise that the God of love affirms love.”

Her wife’s atheism is not an issue between them, she says. “It would be different is she was anti-Christian, but she’s not; she’s respectful. She comes to church with me; she doesn’t pray in the way I do, but she listens. She has space for the rhythm of my life.”