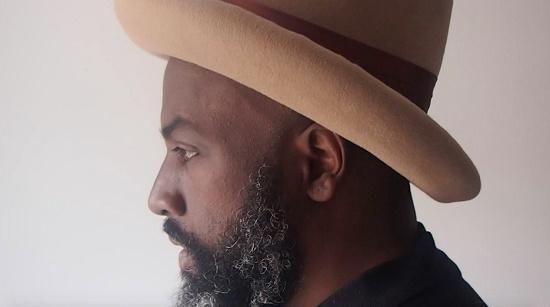 Like Linton Kwesi Johnson said, in a room full of fact you can’t walk out. I’m reminded of LKJ by Roger Robinson’s superb new Dis Side Ah Town set, reminded also by the sleeve of Iceberg Slim and his measured, moral glances at his time and his ghetto. Dis Side Ah Town is one of 2015’s major UK masterpieces, a beautifully laced together look at Brixton through the prism of the 2011 riots, spinning backwards through ancient history and forwards to the present gentrification and change that’s mutating one of London’s most emblematically mutant neighbourhoods.

Hackney-born, Trinidadian-bred performance poet and (former) Brixton-resident Roger Robinson, major domo of King Midas Sound and longtime collaborator with Kevin Martin, has taken his own stream-of-consciousness, whispered walking narrative with himself as he strolls the familiar streets of his neighbourhood, and crushed it together with the superbly dated/futuristic productions of digi-dub genius Disrupt from the superb Jahtari label. You must check out how Disrupt makes his music on this video. Don’t worry – these nuts and bolts don’t dispel the mystery of the record. Disrupt’s methods are neither purely analogue, or purely digital, but they are pure magic all the way.

The result of this meeting of minds is unique – an album that lyrically recalls the most incisive and suggestive lyricists in dub and roots reggae, and musically has the weight and heft to back that kind of razor-sharpness up with sounds as brain jangling, solid, diffuse and heavy as the imagery and ideas Robinson conjures and explores. In a sense you can see Dis Side Ah Town‘s uniqueness and power as a blazing indictment of UK music’s unresponsiveness to the events of 2011 but that would be to make it sound hectoring, ‘challenging’, a record you should take like medicine. And it’s anything but. It’s delicious and a joy and a blast and crucially it’s not a purely didactic work of art. It’s inclusive, welcomes you into its walk and talk and wending ways, talks to you directly without condescension. Throughout the album Roger seems to be working from a dual impetus – to be both camera and interpreter.

“I think that comes from the the fact that I wanted the album to be political but not preachy” Roger says. “I was trying to provide some type of sensory moment-to-moment response to the landscape to stop it from being only a rant.”

It certainly feels like we’re following you, like your eyes are the lenses through which we see what you’re describing…

“I think the cinematic aspect came from the idea that I wanted to provide a cohesive world on the album exploring different parts and aspects of Brixton at a particular time. I was conscious at one point of taking the approach of an audio documentary you could dance to, centred around the time of the riots, explaining the causes, effects and recovery in poetic detail”

And this is why what Roger’s doing on the album can truly be called dub poetry. Dub music plays with the sense of authorship. Listening to old Tubby/ Lee Perry/ Prince Far I, it’s undoubtedly human music but the identity in it is scattered because of the production tech. When I teach students about reggae I always play them Augustus Pablo’s King Tubby Meets Rockers Uptown and ask them – could a human being play that snare? Did a human being play that snare? Similarly – dub poetry is made by one person but scatters identity – it’s a poet opening up other voices. An old trick (Shakespeare and Blake spring to mind) but I’m wondering Roger, is that something you try and achieve with your poetry – that multiplicity of voices?

“Yes, completely. The multiple voice thing just allows me to enter other people’s heads and see things from different perspectives. I think it adds some diversity to the picture I’m trying to build and brings energy to the idea of community and landscape.”

It’s that sense of energy and change that comes across as Brixton’s defining characteristic. On ‘Dis Side Ah Town’ Brixton’s history is explored but what’s emphasised is that Brixton can’t be reduced to that history, that the area constantly agitates for freedom to create new identities for itself.

“I think Brixton has many silos of identity that occasionally spill into each other” he nods. “Sometimes the result is fresh and amazing and other times it could be dangerous and contentious. But when you have these things happening daily the overall effect is a place fizzing with energy”

So the moment it stays still it stops being Brixton?

“Yeah. The Brixton I wrote about on the album has already changed radically towards a more hipster environment but it’s not the first time that that’s happened in Brixton. It could easily shift its identity again. You can’t plan Brixton. It shapeshifts too much.”

Similarly your methods appear to vary – there’s a palpable sense that this isn’t a poet transplanted to a studio, the feel is that you’re walking around Brixton reciting this internally – dictaphone quality adds to that live, verite feel. What exactly, not to demystify the album, were the nuts and bolts of recording it and what made you settle on Disrupt as a producer?

“Well, I was a big fan of Disrupt’s production and his label and I never kept it a secret. I think that he caught wind of that and he invited me to make an album. At first I thought he was talking about a solo singing album, and then he said that he wanted a spoken word album which was perfect timing because I had begun a series of poems about Brixton and I knew that his music would stimulate more writing and it did.”

When did you realise it was going to work?

“Immediately. His production is richly textured and it was was perfect for getting the gritty texture of Brixton. Disrupt is also a sound scientist. His attention to sound is incredible. He had me using all types of mics and processors till the voice had the right feel. His studio looks like a mad scientist’s lab.”

Why were you writing about Brixton?

“I think I have always been fascinated with Brixton and I have a memory that recalls images in detail once I am struck with the poetic nature of what’s being presented to me. I’m often walking through Brixton and daily I see things that reflect to me the human condition.”

So how easy was it to boil it down to the poetry included on this album and how did the riots become a theme of the album?

“I could probably do four albums about Brixton” he grins. “In fact, I might just do that but with regards to why I chose to set it in 2011 – it was unforgettable, arriving back to Brixton after touring with KMS and inadvertently walking right into the middle of the riots. That moment, the surreality of it, made my observation even sharper from then on. It was like something from a zombie film. So real it was unreal.”

“No. I think when everyone’s anger is lit and yours is not, you can slip into the position of a ghost among the living. Where you can observe them close up but they cannot see you they can only see their anger. You can also be objective about what you see, like a war photographer who doesn’t take sides but takes pictures.”

Are you surprised about how isolated the album feels though? Bar a few grime tracks at the time and maybe Plan B’s ‘Ill Manors’ I really don’t recall that much artistic response to the riots, certainly none that went beyond being merely snapshots and bravado.

“You’re right but I’m not sure what the reason for that is. I can say that truth and resistance are hard thing to package to sell as a products. I came up at a time where artists were firmly in resistance to authority, whether they made money or not. I think commercial concerns have dampened artist’s resistance impetus.”

The thing is, though the album’s Brixton-based, I’ve been letting it soundtrack my walks around my way too. There’s a universality to it because a lot of what you’re saying is just as applicable to any place where a history is in danger of being wiped out by globalisation, all those Greggs and Starbucks, all those trees growing out of metal grilles.

…And anywhere where gentrification is taking hold…

“Yeah. The danger with gentrification is that it breaks up long-held communities and bonds and histories without acknowledging and valuing them. Brixton has resisted gentrification before and it will again but a lot of energy and resources are being placed into the process of its gentrification, far more than the resources that were available to support it’s long time inhabitants.”

Can you ever turn your poetic head off?

“No I can’t! My poetic head is forever churning even as I’m answering these questions.”

Long may it churn. I’d love another three albums of this. Dis Side Ah Town is a true modern masterpiece and one of the finest things Robinson’s ever been involved in. Don’t sleep on it. You might just miss one of 2015’s finest riots.

Dis Side Ah Town is out now